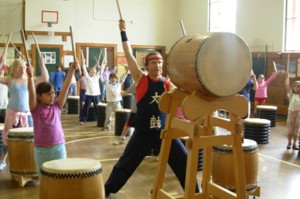 Learn to play the taiko drum in this fun and informative multi-day workshop.

Saturday 10am rehearsal for all drummers before the Burlington Taiko Group Performance. Performance is at 11:30am, WCCMA @ Union, 133 Old Church Rd, Claremont, NH

Since 1987, Burlington Taiko has been mesmerizing audiences with the powerful, spellbinding and propulsive sounds of the taiko.

In 2002 Burlington Taiko participated in its first tour of Japan, performing a series of concerts in the prefecture of Tottori at the Gaina Matsuri in Yonago.