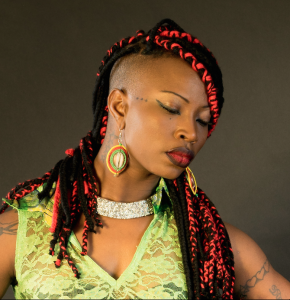 Hailing from Côte d’Ivoire, Dobet is a virtuosic singer, dancer, percussionist, and songwriter who has taken the modern Afropop sounds of her country in exciting new directions. A 2010 GRAMMY winner, Dobet Gnahoré is well – known for her jaw – dropping dance moves, powerful stage presence and richly emotional vocal style.

Dobet will also be offering workshops during this engagement

While Africa has blessed the world with many recognized female artists, Dobet Gnahoré has proven herself to be a truly special talent. Hailing from Côte d’Ivoire, Dobet is a virtuosic singer, dancer, percussionist, and songwriter who has taken the modern Afropop sounds of her country in exciting new directions.

With her latest album, Dobet explores the concept of freedom: The freedom to blend the urban energy of modern Africa with its vibrant ancestral rhythms; The freedom to sing in multiple languages, from the diverse indigenous languages of her native land as well as in French and English, to better convey her optimistic message and reach broader audiences; The freedom to pay tribute to the women of today and tomorrow, to use her words and image to empower a new generation of daring, strong and independent African women.

Couleur was recorded in Abidjan, Côte D’Ivoire during the first Covid 19 lockdown under the artistic direction of the young beatmaker and producer Tam Sir. Dobet wrote the lyrics and composed the songs with input from Tam Sir and her longtime collaborator Colin Laroche de Féline. “I want to be able to dance to my music,” asserts Dobet, and with Couleur that mission is definitely accomplished. Upbeat, dynamic, and filled with unstoppable grooves, Couleur is a fun and catchy album exploding with hope and positivity.

Dobet’s father Boni Gnahoré is a master percussionist and artist who co-founded the legendary pan-African performance ensemble and artistic collective Ki-Yi M’bock. Growing up in this creative setting was a utopian artistic experience for Dobet and a rigorous training ground that provided her with the skills in music, dance, theater, fashion and poetry that serve as her foundation to this day.

Dobet signed with the Belgian label and booking agency Contre Jour in 2003, with which she produced four albums and toured around the world. Dobet’s fifth album Musiki was released in 2017 by the French label La Café. After years of touring, Dobet maintains a strong work ethic, confessing, “When I’m not traveling, I get a little depressed.”

In 2010, Dobet earned further renown when her collaboration with American singer India.Arie on the song “Pearls” earned them a GRAMMY win for Best Urban/Alternative Performance. That same year, the UK’s Guardian newspaper crowned her with the “best performance” accolade at the prestigious WOMAD festival.

Her most recent album, Couleur, draws its energy from the creative fire and passion that Dobet brings to all her work. The lyrics are simple and direct, with universal themes such as the power of women, words of motivation and encouragement when your spirits are low, cries for redemption when you don’t live up to your ideals, and struggles with love and jealousy. Couleur solidifies Dobet Gnahoré’s position as one of Africa’s brightest stars and most striking talents.