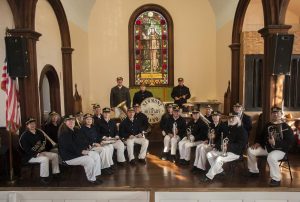 Join us for a skip back in time with the Newmont Band. Performing on period instruments, the band plays music of the 19th C as it would have originally been heard on the town greens. This will be an outdoor concert (bring a lawn chair), in the event of poor weather the concert will be held inside Union Church. All donation at this event go to benefit WCCMA’s Capital Campaign for the Claremont Creative Center. www.claremontcreativecenter.org

About the Newmont Military Band

The Newmont Military Band was formed 1995 to help celebrate the 100th anniversary of the Rachel Harlow United Methodist Church, Windsor, Vt. Our original instrumentation followed that of the many cornet bands in existence in the late 1890s Several years later Newmont incorporated woodwind instruments, so following the conventions of the late 19th century, we became a “Military” band . Most of the brass instruments played by the musicians in the NMB were manufactured during the 19th century, only a few are more modern but follow designs of that era. Our music was borrowed from the archives of the American Band of Claremont, New Hampshire, The Library of Congress, The Chatfield, Mn Lending Library, The Band Music PDF Library, arrangements by some our own band members, and individual donations from our band members based on archival research. As it is authentic or reproduced late 19th century music, it is scored differently than music played by modern bands and we hope you agree it has a different overall sound.

Our program is representative of the music played on the town green in the late 19th century. There are songs of the war Civil War), love songs, marches (including Sousa’s!), dances, and songs from the old folks. Many of our musical selections are chosen from American Band and Windsor Military Band programs documented in the Claremont Advocate and the Vermont Journal between the years of 1890 and 1905. These concerts included music composed by New Englanders, and sometimes the composer himself would conduct (E.E. Bagley, C. L. Brigham).The Newmont Military Band has performed at the Shelburne Museum in Shelburne, Vermont, Windsor (Vt.) Heritage Days, the Franklin Pierce Homestead in Hillsborough NH, The Gettysburg, Pa. Band Festival several times, The Lutheran Seminary at Gettysburg, and numerous other historic venues..

The members of the band come from Vermont, New Hampshire, and Massachusetts. They are your neighbors and friends, and are from all walks of life.