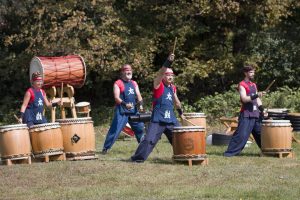 Join WCCMA @Union for an energizing outdoor concert of Japanese taiko drumming with the Burlington Taiko Group and participants in the annual taiko druming residency. Admission is by donation, suggested at $15 for members, $20 nonmembers, $30 for families, and $5 for students.

Since 1987, Burlington Taiko has been mesmerizing audiences with the powerful, spellbinding and propulsive sounds of the taiko.Burlington Taiko Group estimates it has introduced over half a million people to the power of taiko via public performances including feature performances at the 100th running of the Boston Marathon, annual performances at Burlington’s First Night, the Joseph Campbell – Keepers of the Lore festival, the Black Ships Festival in Newport, Rhode Island, and over 200 corporate, collegiate and public performances.In 2001, Burlington Taiko received First Night International’s Prism Award, first place recognition for Most Creative Programming.In 2002 Burlington Taiko participated in its first tour of Japan, performing a series of concerts in the prefecture of Tottori at the Gaina Matsuri in Yonago.The group has been honored 3 times by the International Taiko community having been selected as a feature performer at the 2008 40th International Taiko Festival in San Francisco, the 1999 North American Taiko Conference in Los Angeles, and the 1998 30th International Taiko Festival in San Francisco.Burlington Taikois the performance arm of our non-profit entity, Taiko AikoKai New England (TANE). Our mission: to promote the performance and practice of Taiko and provide education about Taiko and Japanese culture.