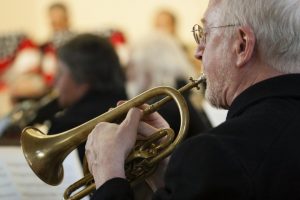 WCCMA is committed to making music accesible for all. Suggested freewill offering for this concert is suggested at $15 Adults, $5 Students, $30 for families.

More info about the Yankee Brass can be found at: yankeebrassband.org

HISTORY OF THE YANKEE BRASS BAND

In 1986, Paul Maybery of St. Paul, Minnesota, Mark Elrod of Germantown, Maryland, and a small number of brass players from around the country gathered at the Hotel Coolidge in White River, Junction. Vermont. The result of this initial gathering was the performances of the Yankee Brass Band in the Upper Valley of Vermont/New Hampshire. What was created was an historically accurate recreation of an American Brass Band circa 1840–1870 performing music of the period in an appropriate style and on the original instruments. Pictures of the band show the musicians in reproductions of “uniforms” that were common attire for bands of the era –  firemen’s shirts (red flannel shirts) and red kepis.

In 1977, the Minnesota Historical Society invited Maybery and his quintet to play period music at its annual meeting. While delving into the historical collections of Minnesota, Maybery became “hooked” on the music and instruments of the 19th century. His first project was to reconstruct the music of Russell Munger’s Great Western Band of St. Paul.

Using old posters and band programs that gave him clues to titles of songs, Maybery went on a search for the original musical scores of the 1850s and 60s. David Briggs, an old college band friend, and one of the directors of the River City Arts Forum of Hartford, Vermont, provided Maybery with a contact in the East.

In Manchester, New Hampshire, Maybery discovered the Dignam collection of music where he found many of the pieces for which he had been searching. Walter Dignam was the leader of the famed Manchester Cornet Band, which had the distinction of performing for President Franklin Pierce. Due to the costliness of printed material in the 19th century, music was copied by hand and passed on from band to band. This enabled Maybery to find surviving copies of music in the Dignam collection and several pieces common to both the Great Western Band and the Manchester Cornet Band.

Not only are the largest collections of period music located here in New England, but many local town bands still have them in their libraries. The Nevers Band of Concord (N.H.) still uses its ancestor’s (the 2nd N.H. Regiment’s Band) music books.

Each July, the Friends of the Yankee Brass, Inc., brings together musicians from all over the country to perform in the Yankee Brass Band. They come as true enthusiasts of the old time band, eager for a chance to play on the 19th century instruments. Some instruments are provided by collectors such as Mark Elrod, Jon Hall, and Wayne Collier. Several of the musicians own authentic 19th century brass instruments. The earliest instrument is a bass drum from approximately 1835, owned by Jon Hall, of Portland, Maine.

Some of the instruments play much like modern ones, but others require some adjustments. “A lot of these musicians don’t know what they are getting into,” says Paul Maybery. “They are playing 140-year old instruments that don’t transcribe well for modern music. Once they hear it, and play it, though, they are hooked. It’s contagious!”

The modern musicians do have to adapt to the valve action on the antique instruments. Today’s horns, such as trumpets or cornets, use piston valves—a piston moves up and down to shorten or lengthen the tube of the brass instrument, altering the pitch. Some of the old instruments have valves using a rotary action—the valves revolve rather than plunge to alter the length of the tube.

Aside from these differences, the instruments have some modern names: tuba, B-flat and E-flat cornets, alto horn, tenor horn, and baritone horn. But, there are two instruments in the band which have become extinct in the modern era—the keyed bugle and the ophicleide.

Several members of the current Yankee Brass Band were involved in the production of the PBS Civil War series, and Maybery assisted in the arrangement of the historic music. Maybery also appeared as guest conductor at the Ford’s Theatre Commemorative Concert on the anniversary of Lincoln’s assassination. Some historic instruments of this period were seen in the Civil War film Glory.

The musicians in the Yankee Brass Band come from all walks of life—engineers, doctors, teachers, consultants, professional musicians and other enthusiasts—like those musicians of the bands of the last century. These people come from around the United States to share a common love and respect for the music of the early brass bands. Many of them direct or perform with similar bands in their own home towns.

The combined expertise of these musicians produces one of northern New England’s most entertaining and informative musical events. With its collection of antique instruments and authentic music scores, the Yankee Brass Band gives the audience an auditory living-history experience they will long remember. The quicksteps, gallops, polkas, mazurkas, schottisches and waltzes, and the many overtures and medleys popular in the mid-19th century make up the program of the typical brass band concert of yesteryear.

The members of the Friends of the Yankee Brass, Inc., the musicians of the Yankee Brass Band, and director Paul Maybery encourage serious scholarship and research. Their goals are to create a “heightened awareness” of the traditions of historic American band music, instruments, celebrated personalities, brass band literature, and styles of historic performance practice. These goals are accomplished through scholarly research and application in presentations of an educational nature.