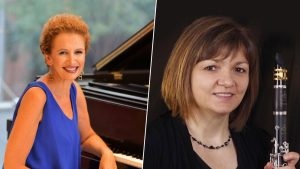 Join us on October 30th, at 3pm, at the West Claremont Center for Music and the Arts (WCCMA) as we present a special fundraiser concert.

Join us on October 30th, at 3pm, at the West Claremont Center for Music and the Arts (WCCMA) as we present a special concert featuring pianist, Sally Pinkas, and clarinetist Jan Halloran. This fundraiser event supports the construction and realization of West Claremont Center for Music and the Arts’ new, permanent home, in downtown Claremont, NH. The concert itself takes place in the parish hall, at Union Episcopal Church, 133 Old Church Road, Claremont, NH. The WCCMA’s new downtown home is not just a home for the WCCMA, but a home for the incubation, growth and celebration of the arts, for Claremont. As we all know, the arts have a special way of fostering community growth by creating connections within the community. We need you, as members of our community, to help us make this new home a reality, as we build for a bright future!

There are a very limited number of seats available in the concert hall, itself (for folks who are vaccinated, and masked). Online viewing passes are also available. Tickets are $110/per person, for in-hall seating, and $40/per person, for online viewing access, to support the arts center (we also gratefully welcome donations from supporters who are not able to attend.) Each ticket purchaser (in-hall as well as online viewers) receives a special swag bag, as well as a private tour of the pre-construction arts center, and the vision ahead for the space.

We are also delighted to share that all funds raised from this event (and all events supporting the WCCMA Homecoming Capital Campaign) will be matched at 50% by the Jack and Dorothy Byrne Foundation. This means that the generosity of your contribution is amplified by theirs, bringing us even closer to our goal.

Praised for her “soulful intensity,” and renowned for her versatility, clarinetist Jan Halloran appears in an array of concert venues throughout New England. The Boston-based artist is Principal Clarinetist of both Boston Lyric Opera and Odyssey Opera and a member of the Grammy award-winning ensemble Boston Modern Orchestra Project (BMOP), with whom she has premiered and recorded numerous new works. She is also a member of the Portland Symphony and a frequent guest artist with ensembles including the Boston Symphony and Pops, Boston Landmarks Orchestra, Boston Philharmonic, Rhode Island Philharmonic and Emmanuel Music. Ms. Halloran’s varied chamber music experiences include the recently formed Bass Clarinets Boston, who make their International Clarinet Association debut in July. She performs and tours with the Walden Chamber Players and has appeared with such notable chamber groups as Collage New Music and the Radius Ensemble. A devoted educator, Ms. Halloran is on the faculties of the Boston Conservatory at Berklee and Dartmouth College and maintains a private clarinet studio. Growing up outside of Pittsburgh, Pennsylvania, Ms. Halloran studied clarinet with Thomas Thompson. She earned her BM at the Eastman School of Music and MM at Boston University, with Michael Webster, and furthered her clarinet studies with Thomas Martin. Ms. Halloran’s recordings can be found on the BMOP Sound, Capstone, Telergy and Navona labels.

Following her London debut at Wigmore Hall, Israeli-born pianist Sally Pinkas has garnered universal acclaim as soloist and chamber musician. Among highlights are performances with the Boston Pops, the Aspen Philharmonia, New York’s Jupiter Symphony, and the festivals at Marlboro, Aspen, Rockport, Pontlevoy (France), Havana (Cuba) and HCMC Conservatory (Vietnam). In 2019 she made her solo debut with the Bandung Symphony in Indonesia, and appeared in recitals in Spain and Brazil. Pinkas tours regularly as member of the Hirsch-Pinkas Duo (with her husband pianist Evan Hirsch) and Ensemble Schumann, and with the Adaskin String Trio. Other recent collaborators include the Apple Hill String Quartet, Cuarteto Latinoamericano and the UK’s Villiers Quartet. Praised for her radiant tone and driving energy, Pinkas’ extensive discography includes music by Mozart, Schumann, Fauré, Debussy, Gaubert, Martinů, Shapiro, Pinkham and Wolff for the MSR, Centaur, Naxos, Toccata Classics and Mode labels. Her most recent CD release of Sonatas by Shostakovich and Bridge was hailed as “A mandatory purchase for all pianophiles: two major works, in performances of utter power… ideal melding of strength and emotional pliancy…” by Fanfare Magazine. She holds performance degrees from Indiana University and the New England Conservatory of Music, and a Ph.D. in Composition from Brandeis University. Pianist-in-residence at the Hopkins Center at Dartmouth College, she is Professor of Music at Dartmouth’s Music Department.

West Claremont Center for Music and the Arts is a 501(c)3 nonprofit organization. (Union Episcopal Church is the fiscal agent for WCCMA, which qualifies donations as tax deductible.) Union Church has donated space for WCCMA programming for many years – including for this important concert event. The building of this new home for the arts center, however, represents a major step in further solidifying the presence of the arts as a vital part of Claremont’s community. WCCMA was founded in 2008 as the Summer Concert Series at Union Church as an organization presenting outstanding musical performers, and the new space will allow programming for the community to continue to grow.

Soundscapes for Clarinet and Piano

(from Eternal Garden: Four Songs for Clarinet and Piano)