Due to technical issues our Eventbrite ticket link has been finicky. There are seats still available, and you are welcome to make your donation at the door, or using the wcc-ma.org/donate option.

It has been an incredible summer of music, we hope that you can join us for this last bash before the fall season begins.

Kinan Azmeh, clarinet and Dinuk Wijeratne, piano celebrate 10 years at WCCMA with new works by the acclaimed duo. The Duo creates a new sonic world through their unique fusion of Arabic and south-Asian vocabulary with classical and jazz idioms. Audiences are moved by their expressive performances and the stories that inspired them. Despite their high demand as world-class composers and performers with engagements across the world Azmeh and Wijeratne consider Claremont to be one of their homes, and make time to return at least once per year for performances, education programs, and collaboration.

This performance is a part of WCCMA’s Summer Concert Series at Union Church, a music series committed to barriers free access to great music. Admission is by donation. For this concert we suggest a donation of $25 or $40 for families, or “pay what you can.” For more information visit wcc-ma.org.

Syrian clarinetist Kinan Azmeh is hailed as a “Virtuoso” and “Intensely Soulful” by the New York Times, “Spellbinding”  by the New Yorker, and “Incredibly Rich Sound” by the CBC.  Kinan has been touring the world as soloist, composer and improviser. His utterly distinctive sound across different musical genres has gained him international recognition as clarinetist and composer. Kinan was recently named composer-in-residence with Classical Movements for the 2017-2018 season, and he is a member of Yo-Yo Ma’s Silk Road Ensemble with whom he was awarded a Grammy in 2017.

Sri Lankan-born Canadian Dinuk Wijeratne is a JUNO award-winning composer, conductor, and pianist who has been described by the Toronto Star as ‘an artist who reflects a positive vision of our cultural future’, and by the New York Times as ‘exuberantly creative’. His boundary-crossing work sees him equally at home in collaborations with symphony orchestras and string quartets, tabla players and DJs, and takes him to international venues as poles apart as the Berlin Philharmonie and the North Sea Jazz Festival.

On Wednesday August 8th at 6:30 Bassel and the Supernaturals will perform an outdoor concert at Union Episcopal Church, 133 Old Church Rd, Claremont, NH, rain location inside the church building. Bring a chair or blanket and all your friends and family for this great family friendly concert. We suggest a freewill donation of $15 each, or $30 for families at the event. This performance is a part of WCCMA’s Summer Concert Series at Union Church, a music series committed to barriers free access to great music.

Bassel & The Supernaturals is an eclectic ensemble based in Chicago, IL led by the soulful vocals of Syrian-American songwriter Bassel Almadani. Their music combines soul, jazz, and funk with captivating lyrics about love, loss, corporate life, and a war in Syria that has directly affected Bassel’s family along with over 10,000,000 others.

The soulful Syrian-American vocalist and his ensemble raised over $11,000 during the preorder campaign for their full-length album, Elements (2017), with over $3,000 in donations for humanitarian aid in Syria. They were also featured in the nationally-acclaimed SXSW showcase ContraBanned: #MusicUnites featuring artists from the diaspora of the countries targeted by the travel ban.

In addition to performing in clubs and festivals across the nation, Bassel partners with universities and charity organizations nationwide to host seminars, workshops, and benefit concerts drawing attention to the crisis in Syria. 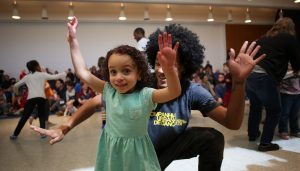